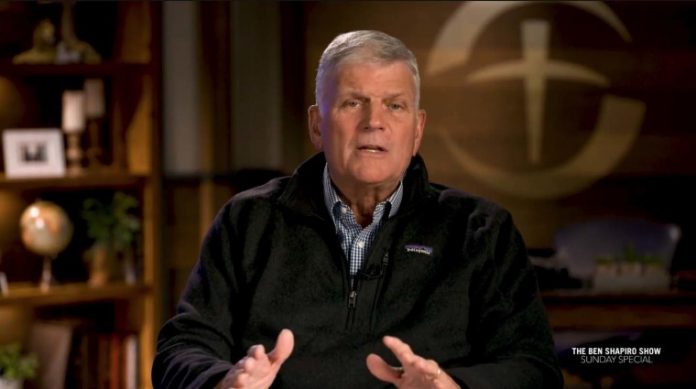 “We don’t slow down,” said Graham, president and CEO of Samaritan’s Purse, when Shapiro, the Daily Wire founder, asked how he, his family and organization are doing during the new coronavirus pandemic.

Shapiro also asked Graham about his perspective on state and local governments deeming churches to be non-essential and shutting them down due to the social distance rules in place. What are Christians supposed to do, as it’s Easter Sunday?

“We need to obey those in authority. That’s what the Bible teaches,” responded Graham, son of the late evangelical leader Billy Graham. “The churches are not shut down,” he continued. “I think more people are attending online services than they did when they were meeting in person.”

Graham emphasized that the Church “needs to continue to be the Church.”

“But I’d just encourage pastors across the country to obey those that are in authority. And I think that’s what the congregations would expect us to do,” he said, calling the virus very infectious and deadly. “Especially for those who have underlying health issues, this could be a death sentence,” he added.

Graham cautioned that Christians should not stop “the work that God has called us to do.”

We just need to do things differently, he explained. We need to be careful; “practicing social distancing is wise.”

He shared that Samaritan’s Purse has sent dozens of healthcare professionals to Italy, “which is not receiving help from anywhere in the world.”

As of early Sunday, there were a little less than 1.8 million confirmed cases of the novel coronavirus and 108, 902 deaths around the world, according to Johns Hopkins University Coronavirus Resource Center.

In Italy, 19,468 deaths from COVID-19 have occurred. Last month, Samaritan’s Purse opened a 68-bed emergency field hospital in northern Italy to help the medical system as it struggles to deal with the coronavirus.

Graham said his organization works in the name of Jesus so that those who are served would know that God cares for them and has not turned His back on them.

Graham shared that Samaritan’s Purse recently set up a team also in New York, where 8,627 people have died from the new coronavirus.

Graham added that the group loves and serves everyone, no matter who they are, and provides the best possible medical care.

Asked about concerns some people have expressed on social media about Samaritan’s Purse being a Christian organization which believes in traditional marriage and is pro-life, Graham said his group shows the same love and compassion to gay and transgender people if they have coronavirus and need help.

We are Christian; we are not equal opportunity employer, he clarified. The doctors and nurses are all Christians, he added. “What motivates us is our faith in Jesus Christ.”

In February, the Scottish Event Campus and other facilities canceled events planned by the Billy Graham Evangelistic Association, which Graham heads, for a summer visit to the U.K. due to his biblical view on homosexuality.

Graham said that “the blowback is not against me, it’s against God.”

The Bible teaches that marriage is between a man and a woman, he explained. “That’s what I believe,” he said and added that he doesn’t compromise with his religious beliefs and will not change them.

“This is not something to think this is the end of the world, but it is not something that’s also to dismiss,” Tenpenny told The Christian Post at the site of the field hospital Thursday. “It’s serious. It’s a serious disease. It’s not the end of the world. We’re going to make it through this, but it is serious and anyone that says differently I don’t believe they’re speaking truthfully.”

This site uses Akismet to reduce spam. Learn how your comment data is processed.